Warning: count(): Parameter must be an array or an object that implements Countable in /home/customer/www/candiatothecamino.com/public_html/wp-content/plugins/closify-maestro-image-uploader-gallery-builder/includes/cmb/init.php on line 746
 The “Why” – Candia to the Camino
Skip to content

Why I’m Making This Pilgrimage

For several years, Barb talked about this thing called the Camino De Santiago. A Pilgrimage walk in Spain on ancient Roman trade routes. An opportunity to walk and discover new spiritual insights and meet people – discuss philosophies and ideologies.

My traveling excursions up to this point tended to be nature oriented – jungles in Belize, sea turtles in Costa Rica, gray whales with an Earthwatch Expedition in Baja CA assisting scientists

But the moment Barb said she was willing to go it alone – that’s when I decided to climb on board. Heck – I like to walk. I’ve never been to Europe. Those seemed like reasons enough to join her. This could be fun!

Suddenly my sense of travel DID include people, foreign culture and an opportunity to explore.

In the words of Cat Stevens
“ …so much left to know, and I’m on the road to find out!” 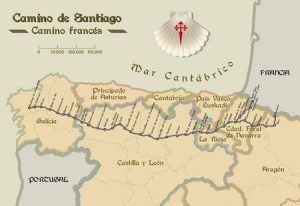 Let’s Call It an Obsession

Have you ever been totally captivated by a book or movie? So captivated that it borders on obsession? I became obsessed with the movie The Way about four years ago. I’m not a movie buff like Judi is, but I’ve watched this one countless times, memorizing dialogue, dissecting the plot, and being enthralled by the scenery.

In The Way, the main character, Tom, played by Martin Sheen, has chosen a safe life of work as an ophthalmologist, of golfing with his friends, and of the lonely life of a widower. His adult son, however, has tired of books and study, quits his Ph.D. program in anthropology, and sets off to live a life in the wide world, walking the Way of Saint James, the Camino de Santiago in Spain. On his first day, though, he is caught in a sudden storm and dies along the route. Tom flies to Spain to claim the son’s remains. In an uncommonly spontaneous move, Tom sets off with the son’s backpack, gear, and cremated remains to make the pilgrimage himself and to understand his son. Through the nearly 500-mile journey, Tom undergoes an enormous transformation. He becomes more trusting, open, centered, daring, self-confident, and strong.

The lure of personal transformation motivates me to make my own pilgrimage along the Way of Saint James. So now, just before I turn 70 years old, I’m off on my quest.